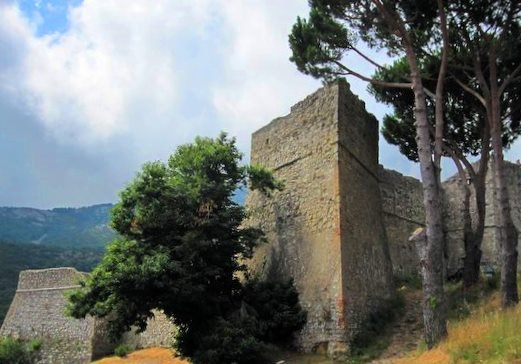 In the splendid Marciana there is one of the most evocative structures on the Island of Elba which undoubtedly deserves an in-depth visit. This is the Pisan Fortress, built in the 12th century on a hill at an altitude of 400 meters, in order to observe and control the entire surrounding area. Even today, from the Fortezza Pisana it is possible to have a panoramic view of Marciana and all the surroundings.

The two front bastions house the Fortress Museum, inaugurated in July 2013,. In the left bastion reproductions of medieval and Renaissance edged weapons are exhibited, together with documentation of falconry. In the bastion on the right there are archaeological finds found inside the fortress (fragments of majolica pottery from Lucca, Montelupo and Savona) dated from the fourteenth to the nineteenth century, together with historical information on Marciana and the fortress. The exhibition closes with a panel on the navy and naval fleet of the Republic of Pisa.
It is possible to take relaxing walks along the patrol paths, while, during the summer, the courtyards are sometimes used for shows and concerts